Aim of the project

The Gopher Science Labs activities are simple hands-on science activities designed to build children's confidence and encourage their natural curiosity to find out how and why everyday things work.

The Gopher Resource booklet contains 10 activities. Each activity includes teacher's notes which describe how to carry out the activity. You can download the resource booklet here (1.5MB pdf).

Gopher Resource booklet is a transition phase initiative funded by the Welsh Government through the National Science Academy and delivered by the Royal Society of Biology.

See Science managed the project 'Science Enquiry: Wales' which was funded by the Primary Science Teaching Trust. This exciting project was set up to support Scientific Enquiry and the transition between primary and secondary schools in Wales.

Secondary schools and their feeder primary schools collaborate with each other and with STEM (Science Technology Engineering &amp; Mathematics) Ambassadors – people who want to share their passion for their careers to encourage pupils of all ages to take an interest in STEM Subjects.

The schools and Ambassadors work together to develop a sequence of lessons which will improve pupils' science skills and knowledge, which pupils then apply in an investigation. This investigation is carried out in the classroom with the teacher and the STEM Ambassador working together.

uring their participation in the project teachers are made aware of the Primary Science Quality Mark (PSQM). A PSTT College member attends the CPD course to speak of their experience of PSQM, the benefits of PSQM and how to apply for funding to run it.

Feedback from teachers participating in the project

Feedback from pupils participating in the project 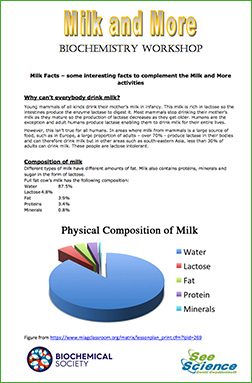 Milk and More is a new workshop which has been developed by See Science and funded through the Biochemical Society Scientific Outreach Grant which introduces biochemical science for KS2/3 audiences. It consists of 4 different hands-on milk based activities, as well as some ideas of other food-related experiments, all suitable for use within lesson time or as STEM Club activities.

You can download a zip file of all the resources here.

Read about our visit to Castle Dairies, Caerphilly here

The Biochemical Society has grants to increase participation in the molecular biosciences at school level and beyond through engagement activities. Applications for funding are invited to assist with the direct costs associated with an event and expenses incurred. The type of events funded could include: Maths in Museums is a digital resource to support the numeracy framework in primary schools.

The toolkit was developed in partnership with See Science. The toolkit is sponsored by the National Science Academy grant scheme.

Cyffro a Rhyfeddod Gwyddoniaeth (Excitement and Wonder of Science) has been developed to stimulate thinking and encourage pupils to explore further scientific questions that arise in their everyday lives.

It also applies the content of Science in the National Curriculum in Wales and the new WJEC GCSE Science specifications.

The resource has been sponsored by the Welsh Government and authored by Cerian Angharad of Cardiff based STEM consultancy See Science.